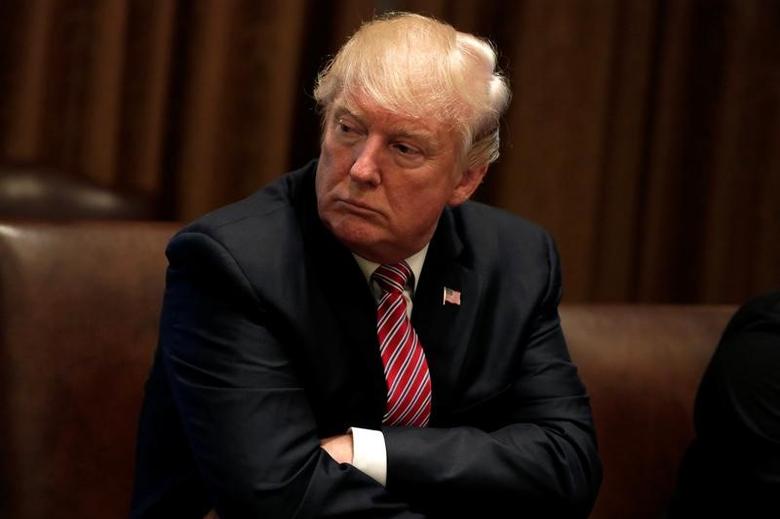 Two television hosts attacked by U.S. President Donald Trump questioned the Republican leader’s mental health on Friday and accused him of trying to exert pressure on them over unfavorable coverage, calling it blackmail.

Trump drew a barrage of criticism on Thursday, including from his fellow Republicans, after he called Mika Brzezinski, a co-host of the MSNBC “Morning Joe” program, “low I.Q. Crazy Mika” and said she was “bleeding badly from a face-lift” when she visited his Mar-A-Lago estate around New Year’s Eve.

He referred to her co-host Joe Scarborough, a former Republican U.S. congressman, as “Psycho Joe.”

The two television anchors, who were on friendly terms with Trump early in the 2016 presidential campaign but have been critical of him since he took office, responded with a column in The Washington Post on Friday.

“This year, top White House staff members warned that the National Enquirer was planning to publish a negative article about us unless we begged the president to have the story spiked. We ignored their desperate pleas,” they wrote.

Scarborough added on the “Morning Joe” show on Friday that he received calls from three top administration officials asking the co-hosts to call Trump and apologize for their coverage of his administration. They told him that if he called and apologized, Trump would get the story killed, Scarborough said.

“The calls kept coming, and kept coming. And they were like ‘Call, you need to call. Please call. Come on, Joe. Just pick up the phone and call him,'” Scarborough said. “It’s blackmail.”

Two 19-year-old men have been arrested by the NSW Joint Counter Terrorism Team, which was also searching three properties in western Sydney.

Two men have been arrested by counter-terror police in western Sydney investigating firearms and drugs supply.

The 19-year-olds, from Merrylands and Toongabbie, were to be interviewed following their arrest in Auburn on Friday evening.

The NSW Joint Counter Terrorism Team was also executing search warrants at two premises in Merrylands and another in Toongabie.

Deputy Commissioner Dave Hudson said there was no current or impending threat to the community as part of the arrests.

Trump says in a tweet that host Joe Scarborough called him “to stop a National Enquirer article. I said no!” He calls it a “Bad show.”

In a column posted on The Washington Post website, Scarborough and his co-host Mika Brzezinski say White House staff warned them the National Enquirer was planning to publish a negative article about them “unless we begged the president to have the story spiked. We ignored their desperate pleas.”

Trump on Thursday attacked the show’s hosts, saying host Brzezinski was “bleeding badly from a face-lift” in a December encounter.

Kellyanne Conway says the president had the right to fight back against critics, but she isn’t endorsing his attack on the hosts of MSNBC’s “Morning Joe.”

Conway is a senior adviser to Trump. She said on ABC’s “Good Morning America,” ″I didn’t say I endorsed his attacks; I never said that. Bottom line, I endorse his ability to connect on social media with Americans.”

In a separate interview on Fox News, Conway said she’s “very pleased with how he treats women in the White House,” but notes that women in the public eye are often targets of vicious comments. She says: “I have kept my mouth shut on a never-ending assault based on my gender,” later adding, “But I’m here for a bigger purpose.”

Source: The Latest: Trump tweets back at ‘Morning Joe’

The video has racked up millions of views.

“They use their media to assassinate real news,” the woman’s voice says scornfully. “They use their schools to teach children that their president is another Hitler. They use their movie stars and singers and comedy shows and award shows to repeat their narrative over and over again.”

It may sound like an excerpt from North Korean state television railing against the evil Americans and their corrupt democracy on the far side of the Pacific.

But these are the opening lines of a new recruitment video by the National Rifle Association of America that is headlined by conservative television host Dana Loesch. The Blaze personality and NRA spokeswoman doesn’t hold back, painting a stark picture of the U.S. political climate that some have interpreted as an ad designed to provoke fear, if not incite violence…

Source: The NRA recruitment video that is even upsetting gun owners – The Washington Post

Same-sex couples get full marital and adoption rights – but Angela Merkel votes against the change.

A clear majority of German MPs have voted to legalise same-sex marriage, days after Chancellor Angela Merkel dropped her opposition to a vote.

Mrs Merkel’s political opponents were strongly in favour. But the chancellor, who signalled her backing for a free vote only on Monday, voted against.

The bill was backed by 393 lawmakers, 226 voted against and four abstained.

The German legal code will now read: “Marriage is entered into for life by two people of different or the same sex”, AFP news agency reported.

Following Friday’s vote, Mrs Merkel said that for her marriage was between a man and a woman. But she said she hoped the passing of the bill would lead to more “social cohesion and peace”…

Get the Sore Bits Working Again

BBC Culture picks eight films coming out next month, including Marvel’s new Spider-Man reboot, the last in the Planet of the Apes trilogy and one of the best rom-coms in recent years…

A TRUCK driver and his passenger have had a lucky escape this morning as trees came crashing down around them before one smashed through their cabin.

Dardanup Removals owner and truck driver Will White was travelling along Garvey Road in West Dardanup about 11am when a small storm swept through the area.

As Mr White turned onto Garvey Road on his way to a delivery, he saw what he described as “one of those scenes from a tornado movie”.

“As we came up to the corner, this squall started coming up,” Mr White said.

“It started to blow really heavy as I came around the corner and we just saw this canopy of trees and they started to lift.

“We pulled up and I looked in the rear-view mirror and could just see these trees coming down.”

He said all of a sudden there were about four thumps on his truck then a massive “bang” before one of the trees smashed through the cabin landing on the headrest of his passenger’s seat.

Lavish London mansions. A hand-painted Rolls-Royce. And eight dead friends. For the British fixer Scot Young, working for Vladimir Putin’s most vocal critic meant stunning perks – but also constant danger. His gruesome death is one of 14 that US spy agencies have linked to Russia – but the UK police shut down every last case. A bombshell cache of documents today reveals the full story of a ring of death on British soil that the government has ignored.

This is Part Two of a BuzzFeed News investigation.

Part One: Poison In The System
Part Three: The Man Who Knew Too Much
Part Four: The Secrets Of The Spy In The Bag

MORE From Russia With Blood: 14 Suspected Hits On British Soil That The Government Ignored

TENNIS star Caroline Wozniacki shows how to really paint the lines ahead of Wimbledon.

The Dane, 26, wears full body paint as she looks to win her first ever Grand Slam title.

Caroline Wozniacki reveals she has no faults in body paint for a Sports Illustrated swimsuit issue.

Tennis star recently stripped off for ESPN the Magazine Body

This Sports Illustrated shoot in St Vincent is latest of our Page 3 smashers this week, ahead of the tournament from Monday.

In an interview this week she said: “It’s so in to have curves now. It’s in to be looking healthy. If I don’t look like a supermodel on the runway, that’s OK because I look good in my own way.”

If she wins Wimbledon they’ll be painting the town red, too.

Source: Caroline Wozniacki shows how to really paint the lines ahead of Wimbledon