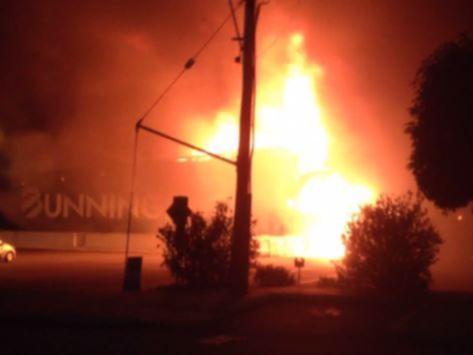 The massive fire that destroyed a Bunnings in Inglewood was not deliberately lit, the Arson Squad has confirmed.

Fire broke out inside the Beaufort Street warehouse around 9pm on Monday night, and put nearby homes and lives at risk.

While exactly what started the blaze still remains a mystery, it is no longer being treated as an arson investigation.

At the peak of the blaze, 25m flames caused the roof and supporting walls to collapse as fire crews worked frantically to protect the homes bordering the building.

With spare parts at a premium at this time of year, all the teams will be particularly wary of heading out on the icy/wet track in fear of ending up in the barriers.

Who will be the first to brave the conditions?

And there is that green flag after a three-hour delay.

Rather predictably, no one has exactly raced out there…

SHE’S the Aussie TV legend who graced our screens for six decades.

With her flame red hair and formidable presence, Cornealia Frances appeared in some of Austalia’s most iconic soapies such as Home and Away, Sons and Daughters and The Young Doctors.

But the popular actress is now undergoing the fight of her life as she battles cancer.

The 76-year-old was diagnosed with bladder cancer in 2017 before being told it had spread to her hip.

THERE’S the Capel cougar, the Nannup tiger, the Jarrahdale jaguar and now Toodyay locals are laying claim to their own cat mystery with a ‘panther’ sighting on Friday afternoon.

The town has been abuzz since shaky video footage of the black ‘panther’ at nearby Katrine was uploaded to social media.

But is it an urban legend come to life or just a well fed feral cat?

The cat-like creature has ignited furious debate with some people recalling their own sightings of big cats and others calling it a hoax.

Barry Leslie was among a group of friends camping near the old church and cemetery, when they spotted the big cat moving through bush near a fallen tree.

“The tail really sort of struck me as unusual … and it was pretty big because we were a good 150m away,” he told GWN7 News.

He said it’s tail was thicker than usual and it had wide-set yellow eyes.

After reviewing the video Mr Leslie and his friends now believe there was more than one big cat.

“I’ve noticed to the side there is a much larger cat that’s what the first cat that I was taking notice of was looking at was the other cat which is bloody big.”

Members on Facebook group Toodyay Community Forum have been closely debating the validity of the footage and whether it is actually a feral cat or something more mysterious.

Murdoch University wildlife biology researcher Associate Professor Trish Fleming said the video did appear to have captured a cat, but its posture and behaviour looked to be that of a feral cat which grow to an”enormous size” in Australia.

“It appears that there have been increasing numbers of massive individual feral cats sighted in Australia (and even caught on camera),” she said.

“We could easily have increasing selection for enormous cats, as they would be better able to handle larger prey such as wallabies and small roos…

Here are Craig Slater and Ted Kravitz with the latest update from the Circuit de Catalunya.

Craig: “Large portions of the track look OK but there is some sleet still lying on the main straight and, more importantly than that, the medical helicopter can’t fly so there is no way we can get underway.

“We don’t expect to get underway for at least another couple of hours.”

Ted: “A write-off is what it is for the teams and it’s an expensive write-off as well. They are all here, everyone is being paid for, they are hiring the track so the teams are effectively burning money today by just sitting in the garage.

“It’s a mess of their own making, had they all agreed that they weren’t going to run today and run Thursday and Friday which is due to be 12-15 degrees and sunny.”